What did I drink last night?

Me and the girlfriend went for dinner, a glass of champagne plus a bottle of beer whilst eating the antipasti starter followed by 4 bottles of Cortese di Gavi. We sat down for dinner at 1930 and think we were home for middnight, so not a particularly big night out. Nice all the same.

I forgot to mention we had 26oz steak too. Lovely stuff.

At the risk of sounding like a wine snob, i’m partial to any wine, not just Gavi and that’s because I have no idea whatsoever about wine. What I do know though is the very real consequences the next day.

I rised at 1100 and had a breakfast of chilli beans, bacon plus 4 eggs with cheese on toast…my head was in tatters. I washed it down with coffee, orange juice plus a cheapo energy drink…the ones that act like a fuel additive you stick in the car gas tank.

As i literally feel as rough as a badgers ass I though the best thing to do obviously was to head round to my parents’ to really fuck with my head. Which it did. I think I left their house with a brain embolism. Mind you, I think trying to show them the house I have just agreed a sale on via google maps street-view did that for me. Fuck me senseless it isn’t very good on a tablet.

Anyway, any ideas I had in mind to hit the gym soon drowned as quickly as the shit I took.

But it got me thinking (about 10 hours later), would a pre workout help cure a hangover?

So here I am, at 2100 in front of my keyboard, nowhere near the gym tapping away like a true keyboard warrior.

Let’s take a look at the C4 sachet…its black and silver, looks a bit like carbon effect you find on the hood of a ricer.

C4 appear to offer lots of different types of pre workout but they all look so similar it is hard to distinguish between them all.

This is the ’50x’ one in icy blue razz flavor which doesn’t really offer any suggestion of what it tastes like, it’s is pleasant though. 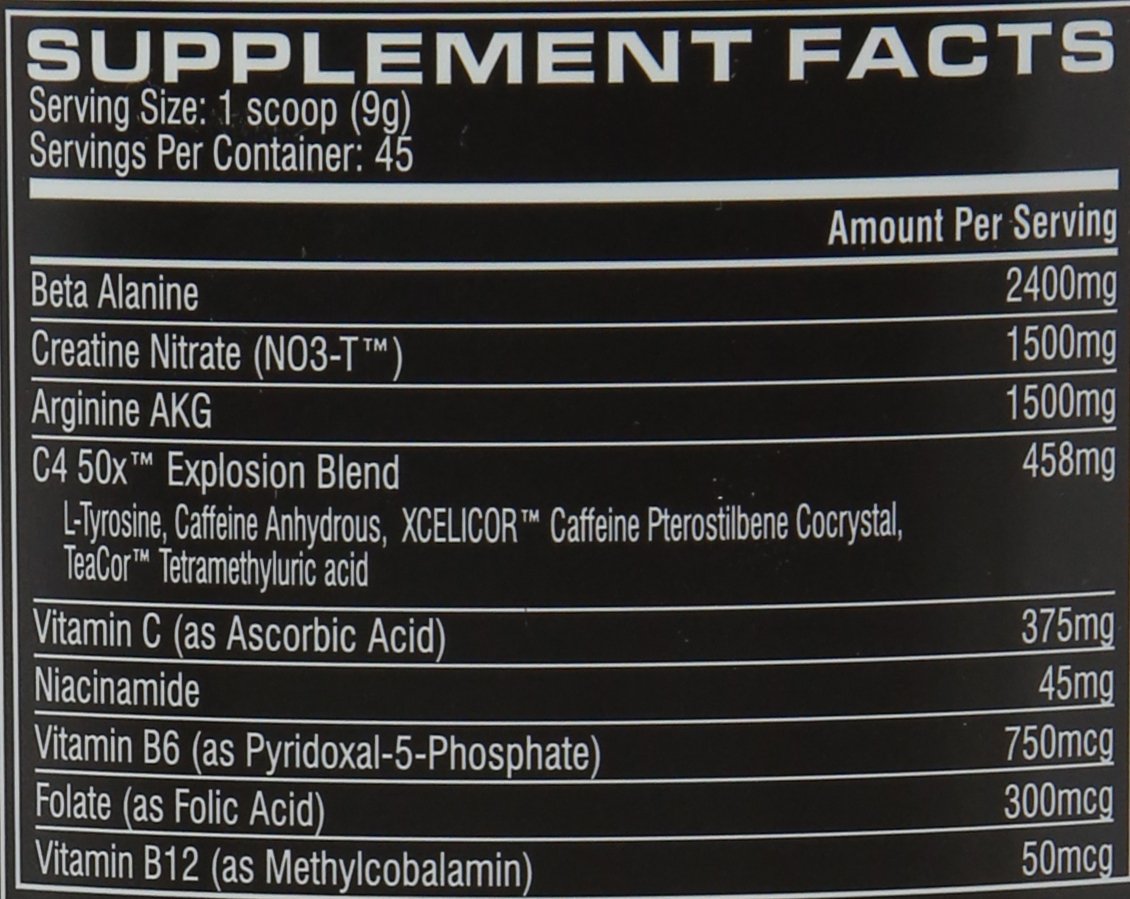 Arginine-alpha-ketoglutarate (AAKG) – Tests on supplementation draw no real benefit that would not be found from resistance training itself.

Vitamin B12 (cyanocobalamin) – Gives you more energy and boost your metabolism, helping you shed unwanted pounds. Ensure you are not deficient in Vitamin B12 so you can do that quick 10 miler at 5am…

Folic Acid (Vit. B9) – There’s many benefits of Folic Acid, treating kidney problems is one of them.

Folic acid can also help produce more testosterone along with B12 but also necessary to form red blood cells and is also necessary in the formation of DNA.

Beta-alanine  – Supplementation of this non essential amino acid aids the production of carnosine. That’s a compound that plays a role in muscle endurance in high-intensity exercise.

That said, studies have been small and not entirely conclusive.

Vitamin B6 – This helps the body use and store the energy from protein and carbohydrates.

Caffeine Anhydrous – The purest form of caffeine available.  It stimulates the central nervous system (CNS), heart, muscles, and the centers that control blood pressure to give you an extra boost and hit that PB.

This is found in Instant Knockout which is the best fat burner available at present.

Niacin –  Higher amounts of niacin can improve cholesterol levels and lower cardiovascular risks. However, the jury is out on these real benefits.

Theacrine (1,3,7,9-tetramethyluric acid) – An alkaloid molecule which can be seen as a structurally modified version of caffeine.

However, although it is similar to caffeine whereby it has a sedative effect at relatively low doses, but where this sedative effect with caffeine is at an impractically low dose with theacrine it is the dose normally consumed by tea.

Research on Theacrine is really too sparse though to cast any real assertions.

1 sachet with water which is 9000mg of high energy and tingly fingers.

It doesn’t taste too bad at all either.

It is good to see vitamin C, both have fantastic benefits for general health and also for neuroprotective and oxidative stress protection properties.

B6 is great for extracting the energy from food to fuel physical activity.

Caffeine is found in many supplements, however, not usually in the purest form as found here. Caffeine is probably the most popular and widely used stimulant in the Western world. Here it is in Cocrystal form which is more soluble and has a better rate of bioavailability

Creatine is sometimes found in pre workouts, however at this dose, it may as well be omitted as 5000mg is usually required and that is after a loading phase of 20000mg.

I did feel good. I have certainly sparked up as I was feeling pretty lackluster before I took the pre workout. In fact the mere thought of reviewing it was difficult enough.

However, not too long after drinking the formula mixed with water I not only took a piss twice my attention increased, so did energy levels and my fingers were tingling.

It felt like when you have been throwing snowballs without gloves on and then you go into a warm building.

Not unpleasant at all though.

READ: Read about our favorite pre workout that turned me in to a beast on the rugby pitch

Ingredients such as creatine are too low dosed to be useful.

The tingling of fingers may worry some people if they have never experienced it, as may the 200mg of caffeine per serving if they are sensitive.

Theacrine isn’t really going to offer any noticeable effects. Nor is AAKG or Beta Alanine according to studies.

I quite enjoyed the experience.

The taste was nice enough and wasn’t gritty or leave a powdery residue.

I liked the tingly feeling and I did feel energized enough to write this review, I do not feel like it would be intense enough to sustain a full blown power lifting workout in the late evening if you have been at work all day though.

Put it this way, I took the C4 50x about 1 hour ago and I am about to go to bed…I do not feel I will have any trouble nodding off either.

So, for a quick rush and a urgent kick up the ass it’s okay. However, the lack of depth in the ingredient profile of effective and proven ingredients is acutely obvious.

It has helped my hangover though, so a refreshing alternative to black coffee.

Ben established this site to be a free resource in 2015. Since then it has gained over half a million visits. He has always been interested in sport and he started playing rugby at the age of 6 represented his town, county and school. Ben also enjoys cycling, has started skiing and is in the Army Reserve representing his Regiment as part of the 150 Regimental Shooting Team. He holds a bachelor's and postgraduate degree in sport exercise & nutrition.

Information about Ben, contributors and the site.

READ: The best T-Booster on the market!